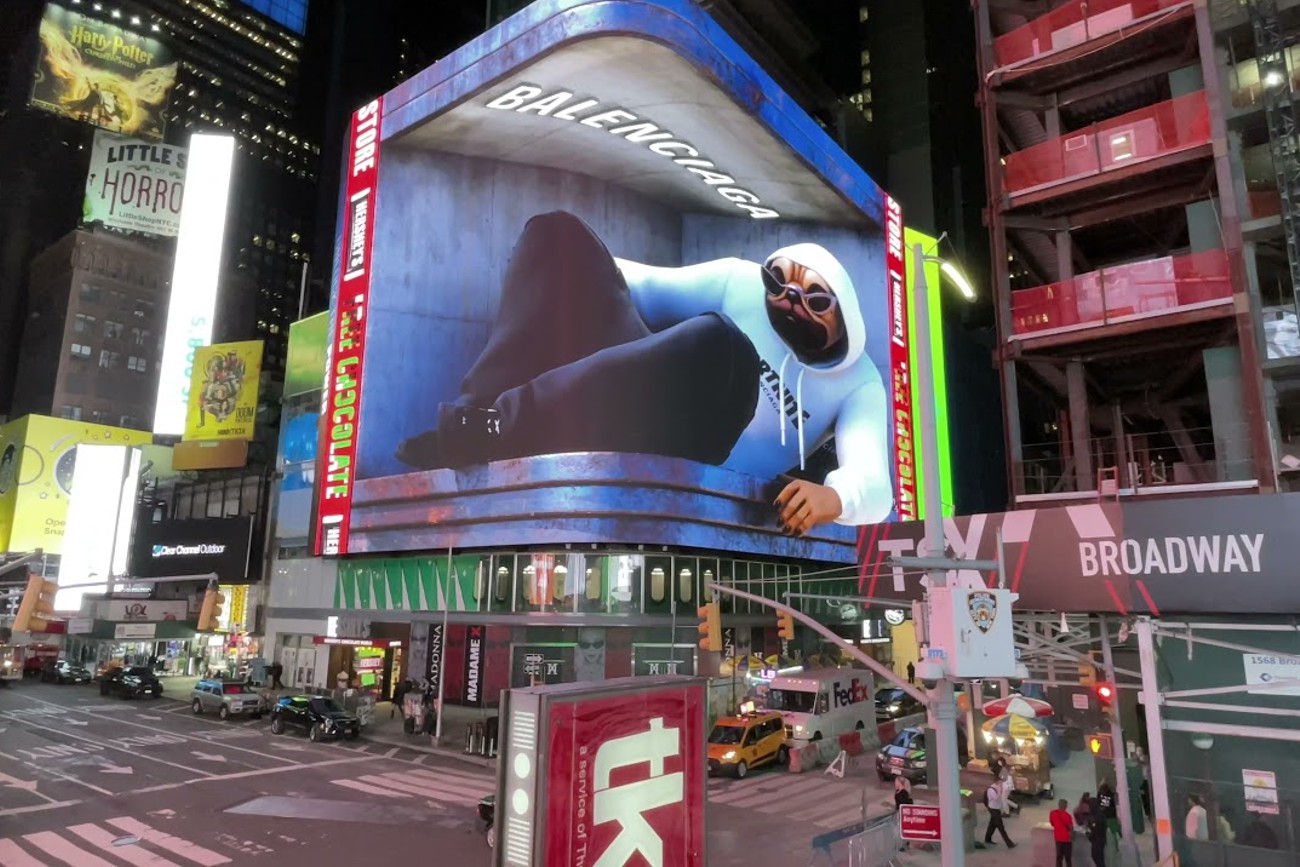 Billboards are one of the oldest forms of advertising and new digital 3D technologies have further expanded their potential, outlining new frontiers for Out of Home ads. Do they represent the future of advertising?

Billboards are one of the oldest forms of marketing, and they have been (and still are) widely used as a promotional tool in large cities and the main transport hubs, such as stations and airports. This is because they are highly efficient in creating awareness of the brand or of a particular product, allowing them to reach a wide variety of demographic sectors with a single advertising message.

As a result, brands are constantly looking for new opportunities to make the most of them. Digital technology once again runs to the rescue of marketers, who have in fact started to use a new format of billboards: 3D ones.

A 3D digital billboard allows you to broadcast three-dimensional images and videos that have made this type of OOH (Out-Of-Home) advertising more captivating and engaging, thanks to the possibility of experimenting with new fascinating and creative styles with a strong visual impact. To such an extent that the Unilumin company, manufacturer of LED screens and installations for multiple sectors, has defined them as the future of marketing.

But is it really so? In this article we will see how exactly these 3D digital billboards work, what advantages they offer compared to more traditional formats and how some companies have already exploited them within their marketing campaigns.

But let’s start from the beginning.

What are 3D digital billboards

As their name suggests, the term 3D Digital Billboard indicates a specific type of billboard that uses 3D technology to show three-dimensional images, very often in the form of short videos that are repeated in loop. The scenic effect of the broadcast adds a level of depth to the content that is not present in classic static images.

Unlike traditional billboards, this innovation requires the presence of a LED or LCD screen on which the images are broadcast. This allows companies to promote a product/service or themselves by quickly attracting the attention of passers-by, offering them an extraordinary visual experience. Very often, in fact, 3D ads seem to want to interact with the public and “get out” from the screen.

But how does it work?

As cutting-edge as it may seem, this type of three-dimensional billboard uses the same technology employed by normal screens that project an image, which in turn exploit physics and the ability of the human eye and brain to create a sense of what you see.

As a matter of fact, each eye perceives a different image but the brain reworks them in a single one to create a sense of depth and perspective. Similarly, the videos broadcast from digital 3D billboards are made using a series of frames composed of two distinct images, depicting different angles, and then joined to create three-dimensionality.

In this way it is possible to create optical illusions that “force” passers-by to believe they are seeing something that is not actually there.

The advantages of 3D digital billboards

This technology leaves room for more creative opportunities. One of the main advantages is that of offering a more interactive and engaging experience than traditional advertisements in our cities, thus allowing graphic designers to indulge themselves with unique formats and styles.

Their flexibility also allows to show the product in its entirety and from different angles or to quickly and simply change the subject of the advertising campaign, in order to always propose something new and interesting but without necessarily having to create a new advertising billboard and install it from scratch.

In addition, thanks to the three-dimensional effects and the novelty they represent, 3D billboards attract the attention of passers-by more and encourage them to stay until the end to find out how the animation evolves. And it is precisely because of the stunning effect, the realism of what is represented and the novelty that digital billboards are usually photographed and filmed by passers-by and subsequently shared on social media. In this way, their exposure is not limited to the place where they are installed, but can reach a potentially infinite audience.

Last but not least, a further positive aspect of 3D digital billboards is that they are, compared to their static counterpart, which requires the use of massive amounts of paper and ink, more sustainable and have a much lower carbon footprint.

Are digital billboards the future of marketing?

The potential of this new technology is big. But are some scholars right when referring to them as “the future of marketing”?

In the past, the physical availability of digital billboards was limited, so they were only used by big companies, of which we will analyse the most popular campaigns below. However, with the evolution of LED technology and its greater accessibility, 3D billboards can now be used by many more brands.

Unilumin reports that the average cost of a 3D digital billboard is between $1,200 and $15,000 per month. However, all ancillary costs must be added to these prices, such as the cost for the development of the video that will be shown on the billboard. Furthermore, if it is also necessary to build the entire structure and install it in a specific point of the city, the price could further increase and reach $150,000.

So, 3D digital billboards have become a much more accessible tool, but they still require programming and animation skills that not all brands have available. Their impact on the public, however, is considerable: they may not represent the definitive marketing strategy, but it is likely that we will see more and more installations on the streets of our cities.

Let’s now see some of the most famous 3D billboards that have appeared around the world.

The most famous 3D digital billboards

In the East, where the usage of innovative technologies is probably more widespread than in the West, 3D digital billboards are now a fairly common installation on the shopping streets of large cities like Tokyo. But there have also been promotional campaigns in New York, London, Milan and Rome.

The 3D billboards in Tokyo

For the International Cat Day, an anniversary celebrated every 8th August, The Pokémon Company has decided to take advantage of 3D technology to advertise its augmented reality video game for mobile phones Pokémon Go. For over a month, the little monsters with feline features Meowth, Skitty, Glameow, Purrloin, Espurr and Litten welcomed travellers exiting Shinjuku Station in Tokyo with a fun and immersive one-minute video.

The hyper-realistic digital choreography begins with Pikachu appearing next to the Pokémon Go logo. After a few seconds, the entire frame collapses to make room for a lush rainforest that quickly populates with other Pokémons interacting with the building on which the billboard is installed.

To fully exploit the three dimensions, the background is periodically flooded with fire, ice and water leaking out of the frame. Finally, the Poké balls also collapse in front of the screen, as if to “catch” passers-by as well.

The 3D billboards in New York

While 3D billboards in Japan have attracted attention with cute and cuddly pets, passers-by in the United States have been less lucky. HBO has in fact decided to advertise its new TV show House of the Dragon, the spin-off of Game of Thrones, with a fire-breathing dragon in the middle of Times Square in New York.

But it was not the first time that Times Square has lent its spaces to this type of promotional activity. In 2017, The Coca-Cola Company was among the first brands to exploit 3D digital billboards with an ad that even earned the company a Guinness World Record for OOH campaigns.

Inspired by mixed reality and three-dimensional design, Coca-Cola created an installation consisting of over 1,700 mobile LED modules which, moving back and forth, helped to give depth to the entire image.

However, the company did not stop there. It has also created a real digital story for a subsequent marketing campaign during the Christmas holidays of 2021, wisely exploiting the levers of storytelling.

The 3D billboards in London

After Times Square, it is now the turn of another famous location: Piccadilly Circus. For the launch of the Army of the Dead movie on Netflix, the streaming platform promoted the film directed by Zack Snyder through a 20-meter-high digital billboard. The company teamed up with Marcus Taormina, acclaimed VFX supervisor in Hollywood, to animate the zombie tiger Valentine in the middle of the British capital.

Obviously, Amazon Prime Video could not be outdone. So, it has chosen to employ the same technology used by its rivals to promote the fantasy series starring Rosamund Pike, The Wheel of Time.

3D digital billboards are a promotional tool created using three-dimensional technology in order to generate incredibly engaging and realistic compositions. But, like all novelty, some of them have also generated some controversy, especially when used to represent grotesque scenes or scary characters like a Resident Evil Licker that seems to “escape” from the billboard towards the Times Square crowd.

Have you ever seen one of these 3D digital billboards? Share your thoughts with us in the comments!EOS Mktg & Communication can help you develop an effective communication strategy and better manage your brand’s online presence. Visit the page dedicated to our services or write to info@eosmarketing.it to receive more information.

Marketing enthusiast, bachelor’s in linguistic sciences for media and communication at Catholic University in Milan and then MSc Media Management at University of Stirling. Thanks to my academic background, I am now working my dream job: I manage communication and marketing strategies for EOS and the ipcm® magazines. In my free time I play basketball and watch lots of films. Favourite team: Milwaukee Bucks. Favourite director: David Lynch. View all posts by Gabriele