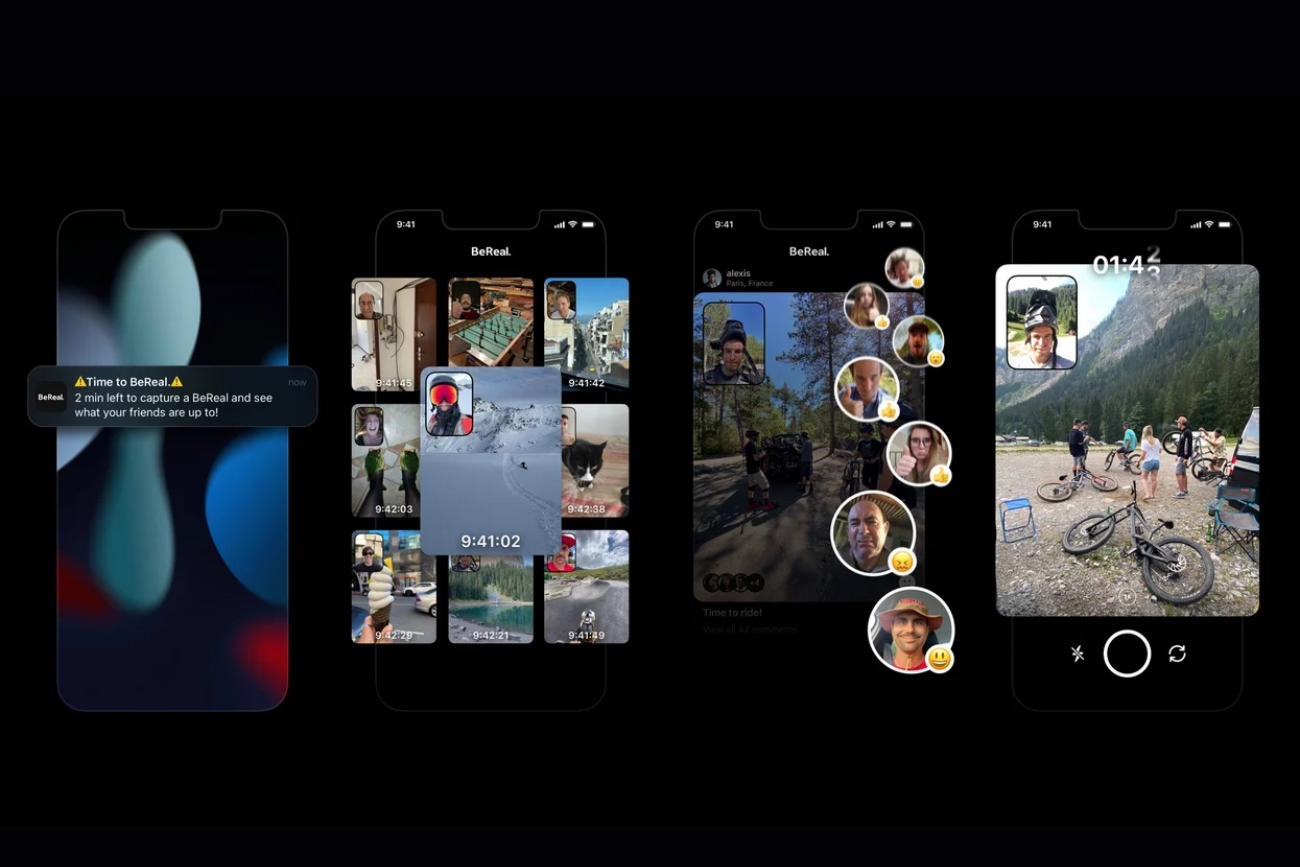 Launched in 2020, BeReal is the new social network that is progressively gaining popularity all over the world, questioning the logic and algorithms of all the major social platforms we know. Spontaneity and authenticity, the absence of filters and likes make this platform unique in its kind. Read the article to find out about the concept and functioning of this new app and discover why it is called the anti-Instagram social network.

Spontaneity and authenticity are two concepts that don’t always go hand in hand with the world of social networks: although social platforms were born to share photos and videos with one’s network of friends and acquaintances, in a short time they have turned into showcases of apparently perfect and enviable lives, which in the vast majority of cases do not correspond to the real life of those behind the screen.

To break down this mix of perfection and fiction that dominates on social media, a new platform was born: BeReal.

BeReal was developed in France by Kévin Perreau and Alexis Barreyat in 2020. After experiencing a period of relative anonymousness, it began to gain popularity in the summer of 2021. Then the app experienced a real boom during the first half of 2022. The app is getting a great response – especially among the members of Generation Z – registering around 10 million active users daily.

The purpose of BeReal is to overcome the fiction that lies behind the contents uploaded on other social networks, and in particular on Instagram. Photos of holidays in exotic destinations, starry dinners or exclusive parties, yachts and luxury cars are some of the most shared moments on social networks. But everyday life is mostly made up of moments that we do not share online as they are often considered trivial and not worthy of being published. On the contrary, BeReal was created with the aim of encouraging users to share their daily lives and show themselves in their essence without filters: a concept that is in line with the slogan of the platform “Be Yourself, Be Real“.

The platform also changes the logic and algorithms that characterize other social media platforms: there are neither likes nor followers as well as no advertisements within the platform (at least for now).

How does BeReal work?

BeReal works in a very simple and intuitive way: after installing the app – available for free for iOS and Android devices – users will receive a notification once a day and at a random and always different time. From the moment you receive this alert, you will have two minutes to take a photo or video.

The strong point of this new app is the spontaneity: since users never know in advance the exact moment in which the notification is received, they will not have the time to think about how and where to record a content or to put on make-up, comb their hair or change their outfit.

The result is the sharing of real, authentic and unfiltered content. Filters or editing tools, in fact, are not allowed on the platform and obviously, we cannot upload photos taken previously. There is actually a way to deceive the app, that is to post a delayed content: after the two minutes in fact, users will be able to upload their photos to the app. However, other users will see the delay with which a photo was uploaded compared to the moment in which we received the notification: this is a sort of “mark of incomplete authenticity”.

Each user is obviously free to decide whether or not to publish a content when he receives the notification. However, only once a photo or video has been uploaded, will we be able to see what our friends have posted and react with the so-called “RealMoji”, emojis that record and mimic our expression. So, if one day we decide not to upload content, we won’t have the opportunity to see what our contacts have shared.

Another important innovation introduced by BeReal is the “dual camera”. When we record a content to be shared on the platform, the front and rear cameras are activated by default, in order to shoot ourselves and what we have in front of us at the same time.

The users can also geolocate their content and decide whether to show the geographic tag only to their friends or to all users registered on the platform in the “Discovery” section – one of the two sections on the platform alongside with “My friends”.

What can we expect from BeReal?

We have seen in this article how BeReal was developed with the aim of disrupting the canons of beauty and lifestyle that dominate on other social media platforms as well as all the logic and algorithms we know. The absence of followers, likes as well as filters do nothing but allow us to show for the first time the authentic and sincere side in our everyday life. In the app, there will not be only photos of breath-taking sunsets, holidays or of designer clothing, but also of days spent working in front of the computer, rather than while shopping or walking with our dog – that is, any moment of our daily routine.

Showing ourselves as we really are and understanding that even the life of our acquaintances is not always perfect as it seemed to us can help especially the younger ones to increase their self-esteem and confidence, as well as to show themselves in a more spontaneous way, without (real or mental) filters.

Whether for the novelty or for its nature that completely changes the habits of social media currently available, BeReal’s message is getting a lot of resonance among the audience, who is perhaps tired of seeing “glossy lives” on their feed. This has prompted other apps to test similar features as well, like Instagram’s IG Candid or Snapchat’s new Dual Camera option.

But what kind marketing opportunities does it offer? Some brands, such as Chipotle, are already testing BeReal’s potential by sharing exclusive promo codes – which resulted in a great success. Some other brands, on the other hand, are using it to show behind the scenes of their business.

One of the biggest concerns related to BeReal is that, once the novelty effect is over, people may find the features of the app (that have however been replicated by more corroborated platforms) repetitive and little appealing.

It is surely too early to sum up and outline what will be the degree of success and the future of the app. However, it is worth dwelling on the message it is spokesperson for and how it has already been embraced by a considerable number of people. And not only that: should it be successful in the long run, BeReal will probably open up new possibilities for creativity and branding.

So, we just have to try BeReal and observe its evolution!

What about you? Have you already downloaded BeReal? Do you think the concept of this new platform might influence what we publish on other social networks? To stay updated on all the news on social networks, subscribe to our newsletter.