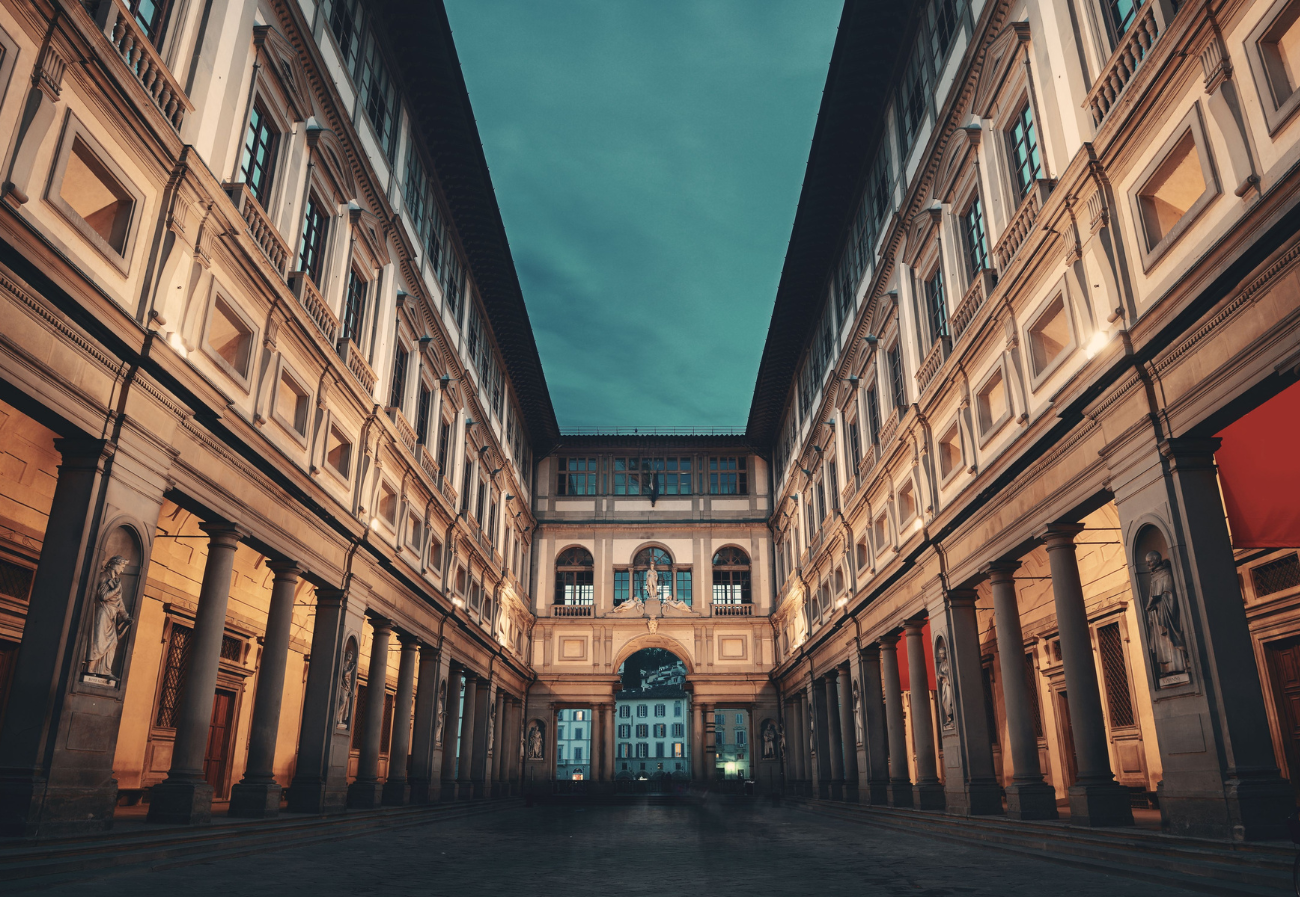 Through a digital marketing and communication strategy, the Florentine Museum has managed to reposition and relaunch the image of its brand and attract a new target audience: Gen Z. In the following article, we will analyse the success of the digital strategy of the Uffizi Gallery.

The Uffizi Gallery is one of the most famous and appreciated museums in Italy, as well as one of the main attractions of Florence: every year, it welcomes thousands of tourists from all over the world. Despite its international fame, even the Uffizi museum was hit hard by the COVID-19 pandemic and the consequent forced closure which lasted several months: according to the director of the museum Eike Schmidt, it lost 72% of visitors.

However, thanks to a forward-looking plan and a truly effective multi-channel marketing strategy, the Uffizi Gallery managed to overcome this impasse and has become the most visited cultural site in Italy with around 1.7 million visitors, surpassing even the Colosseum. This has contributed significantly to the economic recovery of Florence, as well as of the whole of Tuscany.

In addition, the power of social networks, as we will see in the next paragraphs, has allowed the Uffizi to achieve a very important goal: attracting a new audience, those aged between 19 and 25.

Let’s now see in detail the marketing and communication strategy implemented by the Uffizi Gallery to find out why their activities have aroused so much interest (and also some controversies).

When we talk about influencer marketing, we refer to a set of activities that rely on the intervention of an influential person with a huge online following to promote a brand, a product or an event on social media.

The Uffizi Gallery has chosen to implement an influencer marketing strategy for the promotion of the museum and to rely on a series of very popular social media personalities, including one of the most famous influencers in the world: Chiara Ferragni.

In the summer of 2020, Chiara Ferragni was the protagonist of a photoshoot inside the Uffizi for a co-marketing operation between the art gallery and Vogue Hong Kong. The invitation to Italy’s most followed influencer came from the non-profit organisation Hong Kong First Initiative Foundation, which invited her to take some shots close to some of Botticelli’s most iconic artworks and celebrate the Botticelli and His Times exhibition – hosted from 2020 to 2021 at the Hong Kong Museum of Art. The influencer published on her Instagram account, followed by 28 million users, a post stating: “So happy to finally share these amazing images shot inside one of the most prestigious museums in the world, Galleria degli Uffizi, with Vogue Hong Kong!”.

In addition to explaining why she was there, Chiara Ferragni in turn also invited her followers to visit one of the most beautiful museums in the world. The followers responded positively to her call: for the first time, in 2020 people under 25 represented more than a third of the total visitors of the Uffizi Gallery, equal to +34.6%. This result was achieved in the two weeks following July 17th, the date of Chiara Ferragni’s visit to the museum. So, in addition to having gone to the museum for the promotional campaign of the Botticelli and His Times exhibition, she was able to exploit the power of social media to bring young people closer to what is commonly considered a “high” culture.

Despite the positive results, the initiative has also sparked quite a bit of controversy, as the public opinion found it disheartening that one of Italy’s most distinguished cultural institutions choose a social media celebrity to promote its events. Despite the criticisms received, the director Schmidt feels however particularly proud and satisfied with the results.

Chiara Ferragni is certainly the most important influencer to have collaborated with the Uffizi Gallery, but not the only one. The museum has in fact chosen to rely also on Martina Socrate, a very popular Italian content creator with over 1.5 million followers on TikTok, for her first live streaming of about 40 minutes held on the platform. For the occasion, Martina Socrate took on the role of cultural populariser and led the audience to discover the secrets and masterpieces of the Uffizi, the Medici’s Palazzo Pitti and the botanical and sculptural heritage of Boboli.

In particular, she organised a virtual tour of the hallways of the Uffizi in order to allow users to observe the artworks, as well as a series of interactive activities to increase audience engagement, including the opportunity to step into the shoes of critics and curators while describing one’s home as if it was an art gallery (#MuseoACasa) and to reproduce the poses of the subjects of the artworks thanks to a particular filter.

The event took place on the occasion of #MuseumMoment, a digital event organised by TikTok which saw the participation not only of the Uffizi, but also of the Prado in Madrid, the Rijksmuseum in Amsterdam and the Naturkundemuseum in Berlin. The live-stream on TikTok was watched by more than 60,000 users.

TikTok was not only used for the first live-stream of the Uffizi (which was also the first ever live-stream among Italian museums), but it is also the protagonist of a much broader social media strategy.

TikTok allows you to create a very wide variety of video content – including tutorials, dances, short monologues, etc. – which combine irony and creativity. Two concepts that the Uffizi marketing team has been able to leverage, moving away from the traditional (and perhaps more serious) tone of voice of a museum and proposing bizarre and engaging content, more suitable to the style of the platform that hosts them. The goal? Bringing Gen Z closer to the museum, as some of them are still in school and experience social networks as a moment of leisure and distraction.

This is how, through TikTok, the Uffizi begun to share the artworks housed in its Gallery but in an ironic and brilliant key, using songs, sounds, trends and the tone of voice of the platform.

Therefore, TikTok becomes a useful tool not only to bring art directly into the hands of the youngest, but also to dispel the myth that visiting a museum is a boring activity. Furthermore, Gen Z is not only a target of users to whom to sell an entrance ticket, but it represents also the visitors of the future and therefore it must be taken into consideration.

All of this is in line with the challenge that the Uffizi Gallery, i.e., to “rejuvenate” the world of art in the eyes of the youngest, understand the tastes and interests of the new generations and create a personal interest in visiting a museum, without however replacing the didactic mission of the museum and the school.

Thanks to the social media campaign, the Uffizi Gallery has reached more than 728,000 followers on Instagram, on which it uses a more institutional communication, while on TikTok it has 137,000 followers and a very high number of positive interactions and appreciation comments.

The marketing and communication strategy of the Uffizi has not only taken into consideration the more “conventional” digital formats, such as influencer marketing and social media marketing, but has also innovative solutions such as NFTs (Non-Fungible Tokens). The acronym refers to unique and non-reproducible chunks of data stored on a digital register (blockchain) that provides a certificate of authenticity and uniqueness.

The Uffizi is a pioneer in this field, as it has leveraged the innovative digital technology to sell the world’s first artwork in the form of an NFT. The protagonist of this initiative is Michelangelo Buonarroti’s Tondo Doni. The painting was created by Cinello Srl, a Florentine company founded by two IT engineers, through an exclusive international patent: the DAW® – Digital Art Work. Each DAW® NFT is created with the consent of the museum hosting the original artwork, in this case the Uffizi museum, and is accompanied by a certificate of authenticity signed by both Cinello and the museum itself.

This technology is equipped with high standards technology that protects the artworks from any theft or form of falsification or tampering, thus making Michelangelo’s digital painting unique and impossible to copy.

The Uffizi Gallery had nine NFTs of Michelangelo’s painting reproduced. The first one was sold for €240,000, half of which collected by the museum itself. It is also planning to create NFTs of other masterful works – including Botticelli’s Birth of Venus and Spring, Leonardo’s Annunciation and Baptism of Christ, Tintoretto’s Leda and the Swan and Titian’s Venus of Urbino, just to name a few.

However, the sales of NFTs have aroused some criticisms and doubts both from the most passionate art enjoyers and from the Italian institutions as well, as it is feared that the digital art market may take away from Italian museums, and therefore from the State, the ownership of the copyrights.

The Uffizi gallery is enjoying its (well-deserved) moment of glory. After years of closure and uncertainty due to the pandemic, the Italian museum has been able to rise up again by getting involved and experimenting with new tools and formats, even if it has received some criticism and found itself at the centre of controversy.

In our opinion, exploiting new technologies to spread art and culture should not be seen as a way to minimise the size or complexity of an artwork, but as one of the many ways people can get closer to it. If we look at it from this point of view, the Uffizi strategy is working.

So, all is left to do now is buy an entrance ticket to the Uffizi and follow their social media accounts to discover the masterpieces hosted in the Gallery.

EOS Mktg&Communication can help you develop an effective communication strategy and better manage your company’s online presence and your events. Visit the page dedicated to our services or write to info@eosmarketing.it to receive more information!