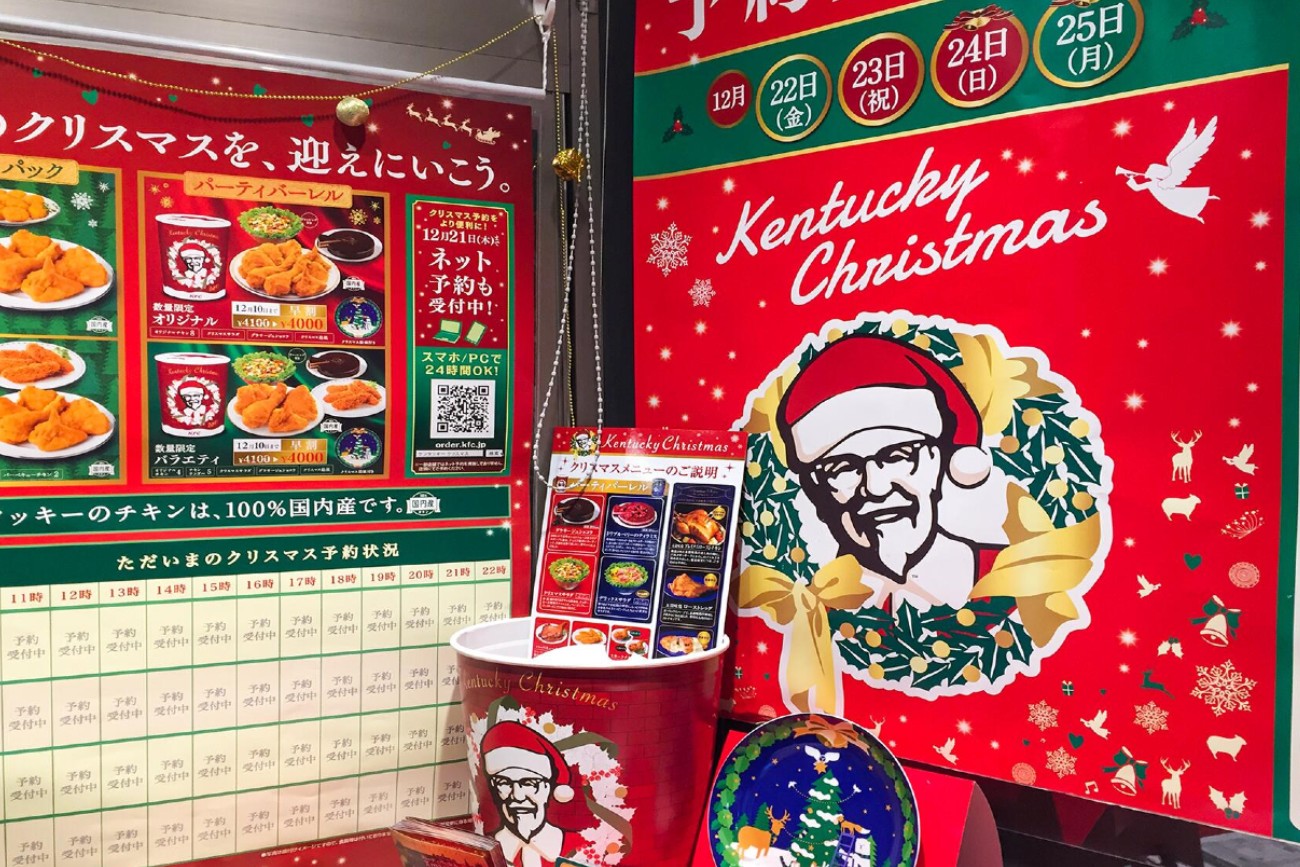 For over forty years, the Japanese have been dining with KFC’s fried chicken on Christmas Eve. Thanks to a targeted marketing campaign, the fast-food chain was in fact able to create a real Christmas tradition. Let’s see how.

Officially celebrated in more than 150 countries around the world, Christmas is probably the most famous holiday on the planet. Consequently, the list of brands that exploit the Christmas holidays for commercial purposes every year is almost endless, but there are very few companies that have managed to associate their name with a specific Christmas tradition – such as Coca-Cola, of which we have talked about recently on our blog.

Every country, if not even every region, has a specific tradition connected to Christmas that has been established over the decades. Some are widespread and known even to those who do not celebrate this holiday, such as the exchange of gifts or the Christmas tree, while others are more particular. Among the latter are Sinterklaas in Belgium, who visits children’s homes during the night between the 5th and 6th  December with his assistant Peter the Moor –  who kidnaps naughty children by stuffing them in a bag –  and Saint Nicholas, who puts gifts in children’s shoes in Croatia.

Of course, food also plays a key role, as in many other events. During the holiday season, many different dishes are served around the world, from turkey in the United States to panettone in Italy. In Japan, on the other hand, it is traditional to eat fried chicken, especially the one sold by the US fast food restaurant franchise Kentucky Fried Chicken, better known by the acronym KFC.

Christians represent about 1% of the entire Japanese population, so Christmas is not a national holiday in the Land of the Rising Sun. Yet, there are many people who celebrate it. In addition to the usual gift exchanges, a widespread tradition is to order food from KFC on Christmas Eve and, to a lesser extent, also on December 23rd and 25th. According to the Financial Times, in these three days the brand earns what it normally earns in a month. In 2018, for example, in the five days leading up to Christmas KFC Japan earned almost 7 billion yen (about 63 million dollars).

The American fast-food chain was able to implement such an effective marketing strategy that a fried chicken meal became the main Christmas tradition in Japan. Let’s find out how they did it.

Japan’s first Kentucky Fried Chicken restaurant opened on November 21st, 1970 in Nagoya, at a time when foreign residents of Japan and Western tourists were rare. But it was only with the opening of another restaurant in Tokyo in July of the following year that its popularity began to increase among young people, who considered it the emblem of Western and American culture.

At the time of writing, there are over a thousand KFC restaurants scattered throughout Japan. The diffusion of the brand is also due to a careful marketing campaign launched for the first time in the mid-seventies and still cyclically revived. The slogan KFC – Kentucky for Christmas, as simple as it is impactful, has had only one purpose for almost fifty years: to remind the public that at Christmas they should eat KFC’s fried chicken.

The KFC commercials that have followed over the years feature the typical scenes of all other Christmas promotional activities: smiling friends and families, Christmas trees, bells and snowballs. However, the buckets containing the fried chicken of the fast-food make an appearance as well. The commercials, accompanied by the Christmas jingle Nice Holiday, have entered the collective imagination so much that they have become a Christmas soundtrack.

But how exactly did the idea of associating KFC with Christmas come about?

How KFC has become a Christmas tradition in Japan

The launch date of the campaign is known (1974), but its conception, as with any tradition, is lost in legend. KFC itself has in fact changed its version several times. According to reports, a US employee of a Japanese Christian school – used to eating turkey on Christmas – wanted to cook it for his students and colleagues. Finding none though, he opted for the fried chicken. An employee of the KFC restaurant where this teacher went told his superiors, who decided to promote an $8 menu of wine and fried chicken.

In another version, the first historical director of the Japanese branch of KFC, Takeshi Okawara, heard some foreigners on the street complaining about the lack of food suitable for Christmas dinner in Japanese restaurants and supermarkets. That same night, St. Nicholas appeared to him in a dream with a party barrel from KFC.

A final version dates to 2017, when, during the television show The Rising Sun Show, the director of KFC Japan declared that the idea was born following a request from some foreign customers, who wanted to see fried chicken delivered to them by delivery boys dressed as Santa Claus.

We will probably never know exactly how this tradition came about, but its success allowed the company to considerably expand its stores and revenues.

Over the decades, the company has continued to promote its various Christmas offerings in a variety of ways, alternating between television commercials, social media marketing, billboards, and a variety of other advertising formats.

Since the mid-1980s, a real life-size statue of Colonel Sanders, the iconic face of KFC, dressed as Santa Claus has been appearing outside every restaurant of the fast-food chain in December.

In 2012, however, the company partnered with Japan Airlines to offer its passengers a limited edition of the “AIR Kentucky Fried Chicken” Christmas menu. All these activities, which individually may seem irrelevant in promoting KFC, have added up over the years to cyclically re-propose the message that eating the fried chicken from KFC restaurants is a typically Christmas tradition that is hard to give up.

But what are the reasons for the penetration of these marketing campaigns within the Japanese public imaginary?

The reasons behind the success of the KFC campaign

The single Christmas menu based on fried chicken and wine evolved over time, to later including salads, cabbage, cake and champagne for a cost of around $35 per person. Thanks to this tradition, it is estimated that over three and a half million people dined on KFC foods on Christmas Eve. What is this success due to?

1) KFC: a foreign but familiar taste

The success of this marketing campaign is not only due to the ubiquitous promotional activities implemented by KFC during the month of December. The company has in fact been able to combine the exotic with the familiar.

According to a BBC report, which carried out a series of interviews to better understand the reasons behind this phenomenon, the fast-food chain is perceived as typically Western and representative of a completely opposite lifestyle to the Eastern one.

The various marketing campaigns implemented by KFC over the years have linked fried chicken to Christmas and Christmas to the idea of consuming foods perceived as luxury. In this way, the company has positioned itself as an elegant and authentic brand to celebrate in true American style.

However, chicken is a food that is very present in the diet of Japanese people, who are historically reluctant to open up to foreign flavours and tastes. As distant as it may seem from Japanese culture, KFC is actually particularly compatible with Japanese cultural norms. The fried chicken itself is in fact similar to the popular traditional dish karaage (breaded and fried strips of meat).

Likewise, eating fried chicken, coleslaw and cake together fits perfectly into Japanese food culture, as sharing food is an important social practice. Therefore, a bucket of fried chicken has a well-known and familiar taste, which satisfies the desire for community and conviviality, but recalling in the minds of the Japanese distant habits and customs.

2) The convenience of having dinner with KFC at Christmas

But it is not just this mix of ordinary and foreign that has made KFC’s fried chicken a real Christmas tradition. Another very important element for the success of the fast-food chain is its practicality. The Japanese population is renowned for leading a busy life, with endless working hours and little time for family.

Also, since Christmas is not a national holiday, few people have the day off to prepare an elaborate dinner. Consequently, ordering a KFC party barrel to take away allows to optimise time, so that Japanese families can sit down at the table all together to share an exotic meal with a reassuring taste from the same bucket.

This aspect, obviously common to all businesses that sell take-away food, has however solidified over time thanks to the incessant repetition of the marketing campaign.

KFC’s ongoing marketing campaigns around the winter period have allowed the brand to create the association between its brand and Christmas. Over the years, KFC’s fried chicken has become a tradition that has fuelled its own success, thus also creating a nostalgia effect.

“Eating chicken from KFC has become practically mandatory in Japan,” 30-year-old Naomi said in an interview with CNN. “My family and I have been doing it all the time, ever since I was a little girl. It is a tradition that I remember very fondly.”

Having created a tradition has also sparked a feeling of nostalgia associated with KFC, which brings families together and encourages people of all ages to annually revive the tradition of ordering a party barrel on Christmas Eve. It is estimated that on December 24th alone, the restaurants of the KFC fast-food chain are able to tenfold the earnings of any other day.

Although it is not possible to clearly reconstruct the birth of this tradition, it has allowed KFC to become a Christmas icon in Japan. This is the result of the combination of several elements, some of which are sought after while others are random, that have contributed to creating one of the most successful marketing campaigns in history.

EOS Mktg&Communication can help you develop an effective communication strategy and better manage your company’s online presence. Visit the page dedicated to our services or write to us at info@eosmarketing.it to receive more information.

Marketing enthusiast, bachelor’s in linguistic sciences for media and communication at Catholic University in Milan and then MSc Media Management at University of Stirling. Thanks to my academic background, I am now working my dream job: I manage communication and marketing strategies for EOS and the ipcm® magazines. In my free time I play basketball and watch lots of films. Favourite team: Milwaukee Bucks. Favourite director: David Lynch. View all posts by Gabriele